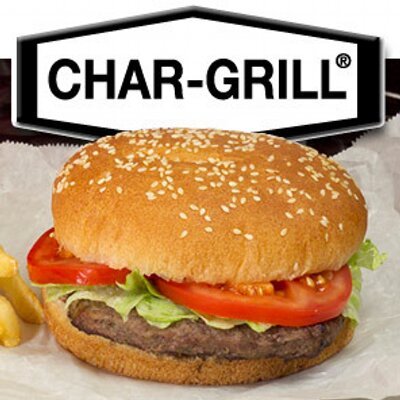 Growing up in Eastern NC, my family cook outs were a must almost every weekend in the summer. My dad would fire up the charcoal grill and throw on whatever meat we had in the fridge. My absolute favorite meal was grilled cheeseburgers and hot dogs, and that remains true today. When I walk into a Raleigh-area Char-grill, the smells, sounds, and the food, takes me back to those wonderful memories.

1959: The first Char-Grill restaurant was opened by Bruce Garner on Hillsborough Street in downtown Raleigh. It quickly becomes a favorite of NC State students and downtowners alike. Char-Grill was patterned after Raleigh’s first fast-food hamburger grill, The Charcoal Grill. The small cinder-block building on the edge of downtown offered take-out service only, with orders taken on a ticket and prepared before customers’ eyes. It remains the same today!

1973: A graduate from Atlantic Christian College, Mahlon Ayock, and a student, Ryon Wilder, decided to become business partners. Wilder, whose family has a deep-rooted history in the restaurant industry, was interested in opening a drive-through hamburger restaurant.

A Raleigh Gem Is Born

1975: Aycock and Wilder negotiate a 3-year rental deal with Bruce Garner’s wife, who had planned to demolish the building and use the land for a parking lot. On April 15, Aycock and Wilder reopen the Char-Grill at its current site, operating the business with only 1 hired employee. Consequently, the new Char-Grill continued the original restaurant’s tradition of serving made-to-order, charcoal-grilled hamburgers. The dynamic duo later purchase the building in 1977.

1978: The beloved 4 oz Hamburger Steak Sandwich was added to the menu as a smaller version of the prevously-offered 8 oz sandwich.

1988: Relying on word-of-mouth advertising alone, Char-Grill’s popularity takes off, and the owners decide to open a second Char-Grill restaurant on Edwards Mill Road in the midtown section of Raleigh.

1994: Aycock and Wilder opened their 3rd Char-Grill on Atlantic Ave in North Raleigh.

1996: The duo opened a 4th location on Strickland Road near the intersection of Six Forks Rd in Raleigh.

2007: Aycock and Wilder open the 1st Cary location of Char-Grill on Cary Parkway.

2014-2019: The partners opened a Char-Grill location at RDU Airport. Also, they opened locations in Wake Forest, Benson, and Clayton to serve more of the area surrounding Raleigh.

While Mahlon Aycock and Ryon Wilder are not brothers by blood, they are brothers of the same fraternity at Atlantic Christian College (now known as Barton College) in Wilson, NC. A Raleigh native, Ryon Wilder, grew up in the restaurant industry and began working for his father in his 2 restaurants at age 12.

Unlike Wilder, Mahlon Aycock had no restaurant experience when the pair decided to open a restaurant together. Aycock was a tobacco farmer from Greene County and Wilder was unhappy with his state job. The two met up at a fraternity convention in the early 1970’s and a plan for Char-Grill was born.

Shortly after, the duo took over the failing Char-Grill restaurant that was opened 13 years prior and revitalized the concept. They took one cinder-block slice of nostalgia and turned it into 10 successful flame-broiled havens.

Keepin’ It In The Family

Both of Ryon Wilder’s sons, Ryon Jr. (“RW”) and Harris manage Char-grill locations. We were able to catch up with RW and talk to him a little about the Cary location, as well as his goals for the grill.

Our recipe is simple. We cook fresh, never frozen certified angus beef on charcoal. The quality of our product and the charcoal taste gives us a very unique taste.

RW’s response when asked about the recipe for the burgers.

Hands down the best burger 🍔 we’ve had in a long time! @chargrill_cary also does more than just burgers and fries 🍟 *not all the food we ordered is pictured because the kids DEVOURED theirs!* 🍔 Pictured on the right is the Char-Burger with lettuce, tomato, ketchup and bacon. Classic perfection! 🍔 🐷 Pictured on the left is the BBQ sandwich with slaw. BBQ is eastern NC style (the only kind that can be called BBQ imo). 🐷 🍟 The fries are pure perfection! The right amount of thickness and crisp. These are a must with every order! 🍟 🌭 Chargrill serves red hot dogs, which tickles this NC native’s heart! Paired with mustard, chili, slaw and fries… there’s not much better! 🥩 The Hamburger steak sandwich (can also be ordered as low carb) is a Chargrill Classic and never disappoints! It’s my choice every time I eat here!🥩 🥤Drinks pictured are chocolate shake, Cheerwine, and Diet Pepsi 🥤 What’s your go-to order? #carync #chargrill #burger #hotdog #barbecuesandwich #frenchfries #milkshake #raleighnc #thingstodoinraleigh #oakcity

Every Char-Grill location includes Eastern NC-style, charcoal-grilled burgers, red hot dogs, hamburger steak, and chicken. Additionally, the menu has Eastern NC-style BBQ sandwiches, classic french fries, creamy milkshakes, and more. RW recommends the famous Char-Grill 1/2 pound Hamburger Steak Sandwich. He says, “It is our biggest burger, so I don’t eat it often, but when i do…. boy is it delicious!”

Click here to check out the menu and order online!

Whether you are a native to the Raleigh area, a transplant, or just passing through, stop by your local Char-Grill for that unforgettable charcoal taste.