Here at Raleigh In & Out, our goal is to promote local business and share their stories. This is the story of Crosstown Pub in downtown Cary NC and owners Sheila and Sean Ryan, the most dynamic mother/son duo around.

Cary, NC began as a small farming community in 1749 and established itself as a crossroads between UNC Chapel Hill (est 1789) and Raleigh (became the state capital in 1792). However, it wasn’t until the expansion of the NC Railroad in 1854 and the Chatham Railroad in 1868 that Cary accelerated into relevance[1]. With the completion of the Western Wake Highway (now Western Ave) in the early 1920s, traveling to and from Raleigh became much easier. People working in Raleigh opted to live in Cary and commute. During the 20s, the only business in the town of Cary catered to the farming community.

Like the rest of the US, Cary was hit hard during the Great Depression, but after WWII, Cary  began to create industry of its own and moved away from relying on Raleigh for employment opportunities. Cary (and NC as a whole) saw huge growth in the 1950s and 1960s. Its population doubled from 1950 to 1960 and then doubled again from 1960 to 1970 with the construction of Research Triangle Park.

Population continued to climb through the decades as many major companies moved into the area, creating jobs and enriching the economy into the town we see today[2].  In the mid 2010s, the town of Cary set out to revitalize the downtown area. The goal was to bring the town into the 21st century, while maintaining its rustic charm.

Sean Ryan and his mother, Sheila, come from a line of restaurateurs 5 generations long. Residents of the town of Cary NC since 1994, the mother/son duo got wind of the downtown revitalization and wanted in. They opened Crosstown Pub in 2015 and have been going strong ever since.

According to Sean, their vision for Crosstown Pub is “to create a fun, safe atmosphere where people can come enjoy food, drink, and friends. We aim to be the ‘local watering hole’ that all walks of life can enjoy together.” If you ask me, I’d say they hit it out of the park. 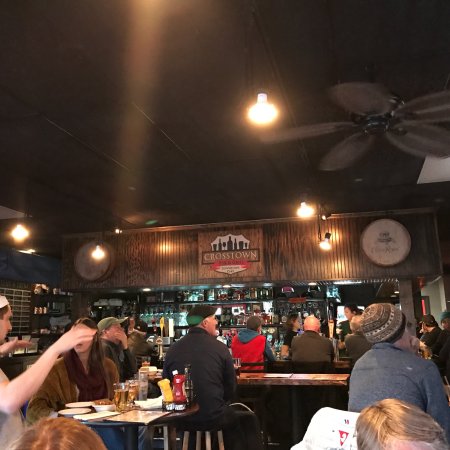 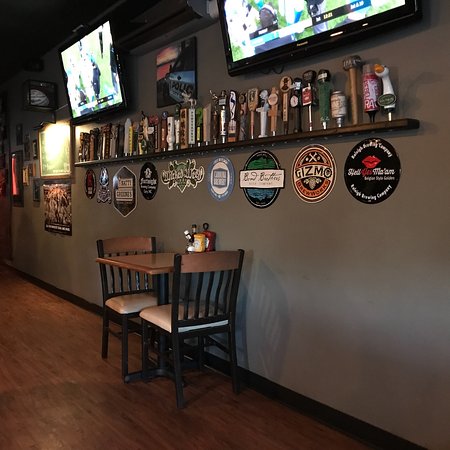 The Key to Success

“I believe that our rotating menu (we switch it up about once a quarter), laid-back atmosphere, affordable prices and specials, and most importantly our staff are the keys to our success. Our staff, led by our bar managers Sean Hallett and Tracy Fee, is what really sets us apart from other pubs. Everyone has done a wonderful job over the past 5 years building a loyal client base and bringing new ideas to the table.”

Eat, Drink, and Be Merry

Offering a variety of American pub fare and crafted cocktails, Crosstown Pub in Cary NC is the winner of several local and state awards for “Best Neighborhood Bar”. They have also won local food competitions, like chili cook-offs and pimento cheese competitions. Unlike many local establishments, the pub rotates its menu quarterly with delicious dishes by chef, Juan Dartes.

The menu features elevated pub fare that are southern staples, such as Fried Pimento Cheese Balls, Peach Shrimp Salad, Fried Green Tomato Sandwich, and (my personal favorite) Jalapeno Pimento Poppers. While the Crosstown Pub burgers are famous in southern Wake County, including Sean’s personal favorite: the Diablo Burger, the beer-battered Fish & Chips are their specialty. That recipe has been passed down through the family and stands the test of time.

While the food and atmosphere are stellar, it’s hard to beat the drink options and specials that Crosstown Pub has to offer. They offer a variety of NC and out-of-state draft, canned, and bottled beer. I am partial to breweries native to the Triangle (#drinklocal) and Crosstown Pub in Cary NC does not disappoint.

During the COVID-19 Pandemic in March-May 2020, Sheila and Sean showed their dedication to their employees who lost hours due to closures. The mother-son pair challenged the community to raise $5,000, with the promise that Sheila would shave her head. They exceeded that goal and Sheila said goodbye to her luscious locks during a Facebook Live stream.

Sean and Sheila have some exciting news to share! They are in the process of opening a new restaurant, called Daybreak. It will focus on breakfast, tacos, and events and is located next door to Crosstown Pub. They plan to open later this year and we can’t wait!

I love to visit the Crosstown Pub when the weather is nice and sit outside with my favorite appetizer and iced cold wheat beer, and watch the hustle bustle of downtown Cary. Whether you like to watch people (like me), are looking for somewhere to watch the big game, or want a night out with friends, Crosstown Pub has something for you.