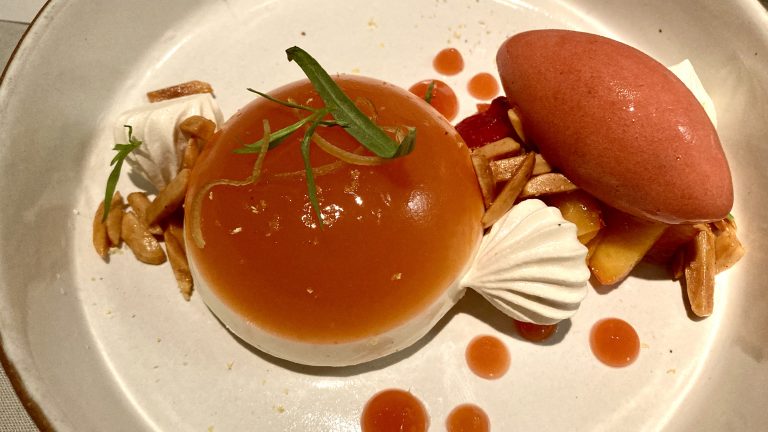 Kō•än means “public table”, but it should be called spoil me with food (Yòng shíwù chǒng huài wǒ, according to Google Translate). The worst part of this meal was how full I was afterward. Like, lie on the living room floor and digest, kind of full. Had to undo a shirt button I was so full. But before I talk about how good Kō•än Cary, NC is, let me set the stage. It was my birthday and I was allowing myself to be a bit spoiled. We all deserve it once in a while, am I right?!

The meal started with sake and moved on to beer (because beer goes with everything). We took our time deciding and landed on two appetizers, which they call “small plates”, and the word “small” is just a ploy to make you feel better about ordering more than one. The “charkuterie” plate, for example, took up half the table. Its rich meats and crisp veggies were just right for chatting and drinking.

I was feeling happy and could have been fine if that was the end of the evening. Then, my dinner companion orders us two entrees to split because that night we were living large, but why not? It’s my birthday!

Ladies and gentlemen, words cannot express how perfectly balanced these dishes were. We ate slowly, a first for us, and delicately devoured both portions. The pork practically disintegrated in my mouth and the chicken was perfectly cooked and seasoned. I cannot express in words how badly I wanted a bathtub full of both, but those weren’t the only stars of these dishes.

As a meat-eater by nature and northerner by birth, I was surprisingly in love with the collards in the pork dish. They were green, not limp, and a flavor that was completely unexpected. Each element of the dishes may have looked gorgeous, but the taste was nothing short of surprising. In addition to the collards I loved the carrots and kale for their taste, texture, and a little kick.

Then came my favorite part of the meal, and my ultimate undoing… the dessert. If I could choose a last meal, it would be the parade of desserts that were put in front of me. Each one was like a work of art and I felt bad eating it (but obviously not too bad). There was a dessert I completely forgot to take a photo of because I was so eager to devour it.

Like the meals, the desserts were not what I expected. They were bold without being in the least bit overwhelming. They were fresh with complex layers and textures.

The night ended with some cookies to take with us because bellies were about to pop. It didn’t stop us from eating one in the car though.

Chef Francisco, you made my year!

Fast forward to lying on my living room floor waiting to feel less full with zero regrets. The relaxed and (honestly) beautiful atmosphere and incredible food were enough to land me in a food coma.

Their name may mean “public table”, but still consider making a reservation at Koancary.com. Others think Kō•än Cary NC is as great as I do!

Growing up in Eastern NC, my family cookouts were a must almost every weekend in the summer. My dad would fire up the charcoal grill and throw on whatever meat we had in the fridge. My absolute favorite meal was grilled cheeseburgers and hot dogs, and that remains true today. When I walk into a Raleigh-area Char-grill, the smells, sounds, and food, take me back to those wonderful memories.

If you’ve ever driven down E. Williams Street in Apex NC, between Route 1 and Salem Street, you may have noticed a perpetual abundance of taco trucks. There are four trucks within a quarter-mile, meaning you can visit all the trucks in a five-minute walk. Curious as to why they are so close together and what makes them special, we tried tacos from all four trucks and here is what we found.

One thought on “The Best Asian-Inspired Cuisine In the Triangle: Kō•än Cary NC”